Mike Lane will officially remain in office after a tight race for his County Legislature District 14 seat against challenger Tom Corey. Lane ultimately won by eight votes, 873-865. Corey led Lane by 20 votes after election night, but after counting the absentee and affidavit ballots a couple weeks later Lane had taken the lead by two.  Read more -> www.ithaca.com “This is a blue collar blueprint to rebuild America,” Biden said of the package, which includes money to fix roads and bridges, upgrade passenger rail, modernize ports and airports and build out high speed internet Read more… 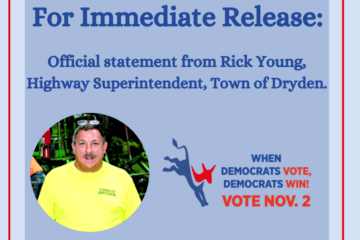 FOR IMMEDIATE RELEASE: 10/18/2021 Dear Folks, Serving as town highway superintendent is one of the toughest jobs I’ve had, but it’s the most rewarding. Like any job, it’s hard to make everyone happy. However, I Read more… What’s in the Build Back Better Bill?